This module focuses on the world of travelling entertainment, which brought spectacle to vast audiences across Britain, America and Europe in the 19th and early 20th century. From big tops to carnivals, fairgrounds and dime museums, it covers the history of popular shows and exhibitions from both audience and professional perspectives.

We include material on the following subjects: 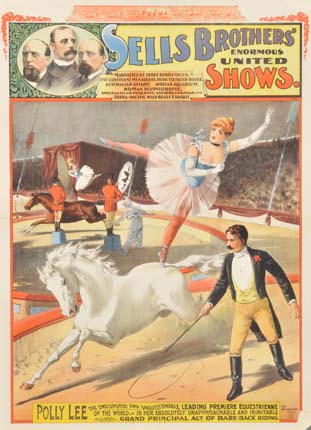 The material is strongly visual in focus allowing users to appreciate the full impact of Victorian advertising design and poster art.

There is a wide variety of material types included, ranging from:

Archives from across Britain and the USA which have contributed material include:

This archive has contributed ephemera, rare books and pamphlets, as well as the Orton and Spooner photographic archive and the John Bramwell Taylor collection of rare printed handbills.

This archive holds a wide range of posters and photographs which are particularly strong on the themes of freakshows and oddities.

Supplementing the primary source material is a wealth of secondary resources, including a glossary of key terms, biographies of significant figures from this period, a dictionary of important venues, a visual gallery which allows users to create their own slideshows of images, and an interactive chronology.

* Please note: If you have purchased Module 2 only, you will not have access to Modules 1, 3 and 4 documents and primary source links within the secondary contextual material.